One of the first things you learn in any language is the alphabet. After singing the kindergarten "Alphabet Song" a dozen times in a new language you think you know it. But just try using the alphabet to spell your name when talking to someone else with a different first language!  Their kindergarten song will have been slightly different!  Earlier I made a post referencing "When a Frenchman Calls an Indian Call Center", an hilarious video illustrating this fact.

You can try to clarify each letter with a word. Typical example: "E as in Elephant".  But, the letter E is pronounced "eeeeee" as in "Eek, a mouse!", while the word Elephant starts with the sound "eh". The letter E is not pronounced "eh".

But in Spanish the letter E is pronounced "eh" as in "elephant". That sounds a lot like the English "A".

To confuse matters, look at the English vowel "I". We pronounce it "eye". In the Spanish kindergarten song, this vowel is the one pronounced "eeeeee" as in "Eek, a mouse!".

Going from language to language, some letters of the alphabet play a game similar to musical chairs.

So I've written a special alphabet pronunciation rhyme on my Alphabet and Names page.  Here are some samples:

A's the first vowel in "Age" but used as the second in "pAge".

E's the first vowel in "Eve". The last E's quite silent in "leavE".

U’s the first letter in "Use" and also is found in "refUse".

G’s the first letter in "Gene". It also is found in “liGht Green”.

Y’s the first letter in "Yikes!" You see it in: “Your Yellow bikes”.

Z’s the first letter in "Zeal". You find it in “that craZy deal”.

Why 100% accurate proofreading is difficult --

Thanks to Maria Flores Ramirez for sharing this graphic on Facebook. 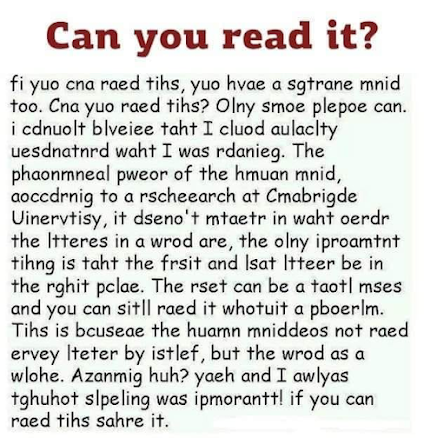 The English language is difficult for everyone to pronounce.

Click on the link for a video of Benedict Cumberbatch, one of the most skilled British actors, with impeccable diction, struggling to correctly pronounce the word "penguin".

An English Teacher at Halloween

Thanks to Bonnie Ruiz for posting this on Facebook. 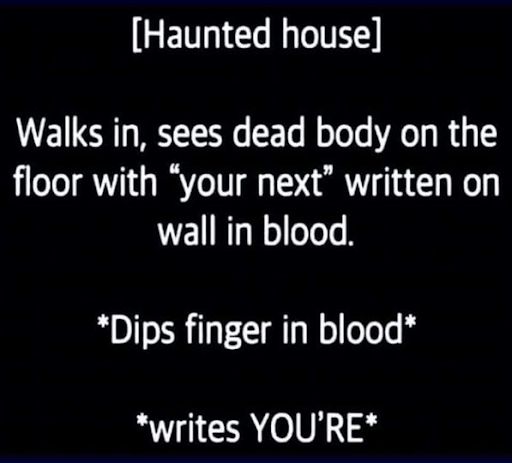 Now I discover that New York City is not one to be left behind in ESL instruction.  See their free online recorded courses and resources at We Speak NYC!   Of course their "Watch, Learn & Practice" video series features stories of New Yorkers who have come from all over the world to make New York City their home. If you don't live in the Big Apple, they want to make sure that someday you will visit or maybe move there permanantly.

And if you do live there, you can enter your zip code to find an in-person class in your area.  They say that during Covid the in-person classes are all in-person online.  Does that mean that someone outside the city (or state! or country!) can also join the group?  Having looked briefly at the sign-up process, I think it might be possible.